The Best Literary Writing About Mothers and Motherhood
You are at:Home»Reviews»Book Reviews»Germs of Truth by Heather Tosteson 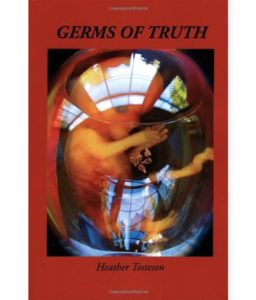 – In the twenty stories of Heather Tosteson’s Germs of Truth no one is left out. All told from a first-person viewpoint, they are populated with adopted children, reluctant mothers, lesbian couples, blended families, resentful sons and more. ‘More’ is also the title of the story ending the first section, which revolves around characters whose lives are touched in every way imaginable by their connections to sperm banks—not only the donors, the donees, their families and the children, but the workers as well.

Most of the stories of the first section are rather short, though they are more than vignettes, a label that would belie their fullness, as the characters with their complex backgrounds expand beyond the page. The section starts off with 21-year-old Vikram of ‘Donor,’ who is more than the “smart ass” the intake worker takes him for, and ends with Caleb, obsessed with the early deaths of the males in his family and dealing with his wife who’s convinced they were given the wrong baby after an emergency c-section and the possibility of his newborn daughter having as many as 67 half-siblings in a tri-state area.

‘More’ leads seamlessly to the second section whose ten longer stories widen the scope. If the first section concerns the myriad responses to the choosing of new life, the second is concerned with familial interdependence both before and after a loved one’s death. ‘The Air You Breathe’ relates in reflection an 11-year-old’s taking care of his father who had ALS, an experience which may or may not have caused the boy’s agoraphobia. The stories are rich not only with characterization but unique imagery and beautiful sentences, such as “But it isn’t the freedom I want for my son, I thought. But thinking isn’t the right word for this knowing which was faster than thought, searing as a hot brand,” from the grieving wife in ‘Duty Bound.’ The final story is another testament to the power of stories, specifically to the writing of them, even if the budding novelist is an 82-year-old grandmother determined to finally grasp a life away from her daughter and for herself by “… tangling fact inextricably with fiction in a way that would change them both permanently for me and all who knew me or thought they did …”

These are wise, openhearted, optimistic (though never saccharine) stories about the world we live in today. Tosteson is also a photographer, and the black-and-white images included in the book are as diverse and thought-provoking as the stories they accompany.

Teresa Tumminello Brader was born in New Orleans and lives in the area still. She holds a B.A. in English from Marquette University and is the mother of two grown children and stepmother of four. Her stories and poetry have appeared online and in print journals, including The Mom Egg.