The Best Literary Writing About Mothers and Motherhood
You are at:Home»MER VOX»Prose»The Write Place by Tina Traster

Seven years ago, we left our Upper West Side co-op for many reasons. My husband needed a driveway. My toddler deserved a bedroom with windows. I had to get out of the kitchen — that narrow room, where, cramped in a window nook, I spent my days writing.

As Virginia Woolf said, “A woman must have money and a room of her own if she is to write fiction.”

I don’t write fiction, but I can say that Woolf, that champion of women’s rights, was spot on. Without getting into the money part (that’s for another day), there’s a point when a stay-at-home writer can no longer share working space with a refrigerator and an oven. She begins to think about opening an antiques store or running for political office or even cleaning the refrigerator and the oven. Anything not to have to type another word.

Woolf would be pleased to hear that claiming a room of my own in a renovated old farmhouse in Rockland County saved this female writer.

The two-story house we bought is not large. In its raw, ramshackle state, the ground floor had a living room with a large hearth and a dark, low-ceilinged dining room with floors so tilted an office chair on wheels became a ride.

But there was also the “ahh” space. It was roughly 300 square feet, with high, vaulted ceilings, skylights and a wall of windows looking out on seemingly infinite woods. The previous owner had used this space as a large country kitchen, though the farm sink was redder than Sedona and appliance knobs hung like a 6-year-old’s loose tooth. A long, pine table suggested many a Dionysian feast.

Back in 2005, any interior designer would have proposed transforming this space into the architectural must-have du jour: the “great room.”

There would be a kitchen island and counters with swirling stools where children would do homework while mom stirs soup. “And over here in this corner,” the designer might have said with a sweeping gesture, “is where you can put your desk and some bookshelves.”

What I wanted more than anything was a separate, dedicated space I could call my home office. Not a nook, not a portion of a room, but an entire room for my books, a rocking chair and a thick rug where I could fold into a downward dog to soothe an aching back. It would be my retreat for thinking and writing and daydreaming.

When we first bought the house, my husband and I walked around brainstorming how to lay out our living space. The living room would remain a living room. But the rest of the downstairs was up for discussion. The dining room was too big for a home office, the ceiling was low, and the view out of the small window was of a road.

I suggested we partition the “great room” into a kitchen and a home office. Both sides would have a wall of windows and skylights.

“What about a family room?” my husband asked sullenly.

“We’ll have to be a family in the living room, the dining room and the kitchen,” I told him. He understood my desperation — obviously remembering how things turned out for Woolf.

Space matters. In this room of my own, I have grown into a different kind of writer. It’s where this column, which I consider offspring, was born. It is where I am now writing a memoir about my adopted Russian daugther. Physical space has broken open a creative vein.

It’s also where I cobbled together a homespun book of old photos and archival material of my father’s years growing up in Colchester, Conn. He cried when I presented it to him on his 75th birthday.

In small, cramped quarters I wouldn’t have taken on that project. But now, with the quiet and the sunlight streaming through windows and the deer feeding outside my window, I had room. 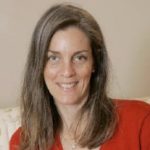 Tina Traster is a New York Post columnist, a Huffington Post blogger and an essayist. She is the author of Burl Appeal Too and Hits & Misses: New York Entrepreneurs Reveal Their Strategies, a compendium of her columns from Crain’s New York Business. Her work has appeared in newspapers, magazines, literary journals and on NPR. Her essays have been anthologized in literary collections Living Lessons, Nurturing Paws, Little Blessings, Not Your Mother’s Book, and Mammas and Pappas. Traster is writing a memoir about her adopted Russian daughter that is due out next year. Her website, which includes a video about her forthcoming book, is http://www.juliaandme.com.