The Best Literary Writing About Mothers and Motherhood
You are at:Home»Reviews»Book Reviews»Butterflies Under A Japanese Moon by Helen Ruggieri 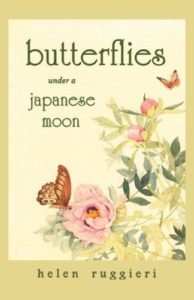 This collection is not what it appears to be on the surface. The cover is subdued with pastel flowers and butterflies. The contents are divided into simple-sounding sections: Yesterday, Today, and Haiku for the Year. Nothing about this cover and these section headings prepared me to encounter a beheading, an artist having his hands cut off, and a monk cutting off his own eyelids, but these events appear right alongside the creation stories, tea leaves, birds, music, and language play. These poems do also contain some peaceful and beautiful imagery, but Ruggieri doesn’t shy away from the grotesque, and the overall effect is all the more beautiful for its complexity.

In the first section, Ruggieri meditates on folk tales and history, especially exploring poet identity in poems like “Ono No Komachi” and “Abutsu the Nun.” Yesterday is never completely removed from the present though. In “Lady Shonagon,” Ruggieri recounts the eponymous poet’s description of a winter scene, concluding the poem with these lines:

she waves a branch
of plum blossoms
over her tanka

she waits
all these years
for my reply

petals
dropping slowly
into my mind

Such moments in which Ruggieri’s perspective intrudes upon past narratives work nicely to set up the second section, Today, in which the poet-speaker reflects upon her own identity as a poet and as a foreigner. In these poems, Ruggieri interacts with both the noisy commercialism and the natural beauty of present-day Japan: here we find McDonald’s and 7-11, but we also find rivers, herons, and mountains. Ordinary people become fascinating under Ruggieri’s scrutiny, such as the one woman who appears in a list of men in the final lines of the poem “Homeless”: “Woman drinking tea in an alley / kneeling in the midst of her bags.” Ruggieri’s attempts to understand and use a language that’s not her own are both amusing and profound.

The final section, Haiku for the Year, begins with a few poems that are not haiku, but that build upon the previous sections’ explorations of poet identity and language use and also set up the haiku sequence that follows. One of these poems, “In Praise of the Haiku” establishes Ruggieri’s place among both Japanese and American haiku writers of the past, layering short tributes to Richard Wright, Basho, Kerouac, and Issa, and concluding, “in the end / only time enough / for a haiku.” The haiku sequence that closes this book is structured into four parts that are named for the seasons. This section stays in the realm of natural beauty, but even some of these images seem sharpened by the gruesome stories of Yesterday. In Fall, “a yellow leaf / carves the wind’s shadow / across the yard,” and in Winter, “the bell tolls for all / our sins—so many sins / so little time.” Ruggieri skillfully creates links and echoes between consecutive poems and across the three sections of this collection. This book is a tightly woven piece of art that is well worth reading, sharing, and reading again.

Katie Manning lives happily with her husband and son in Southern California, where she’s an Assistant Professor of English at Azusa Pacific University. Her poems have been published in New Letters, PANK, The Pedestal Magazine, Poet Lore, and So to Speak, among other journals and anthologies, and her first chapbook, The Gospel of the Bleeding Woman, is forthcoming from Point Loma Press. Find her online at www.katiemanningpoet.com.