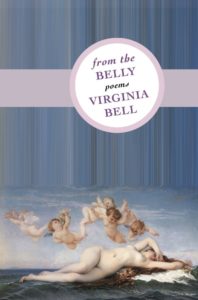 – Reading Virginia Bell’s From the Belly, I felt a sort of indulgent, almost guilty thrill, akin to eavesdropping on purpose to the various conversations that wrap around me in a public place, like in a crowded line somewhere or an auditorium before a concert. Bell’s poems rise to the eye and ear with intensity and distinction, in both style and voice. They take turns speaking openly, as people do in everyday life, about memories, health concerns, jogging through the city, and the multitude of routes our relationships take. The reader gleans a familiarity with the collection’s many speakers, the roles we understand as being those of Bell herself–the teacher, the wife, the mother, daughter, child, artist and lover. We learn of a wide variety of poignant experiences, each uniquely and eloquently expressed.

In “Snapshot #2: Girl Learning to Read,” the teacher describes an after-school tutoring session where there is at first great distance between her and the child, with “silent consonants rising like walls.” But by the final stanza the two share a stunning moment of seeing eye to eye, as they read together an unexpected note from nature–a snail–crawling on the classroom floor, who becomes the organic embodiment of the on-going processes of literacy and living. We hear the teacher describe the snail as, “…a fine cursive ‘c,’ / its pale muscle pulling forward with a faint line.”

It is a wife’s voice we hear in “Break and Enter,” who celebrates her ability to use a screwdriver to remove a doorknob, in her husband’s absence. Having solved the crisis of locking herself out of the bedroom, she says about her hands, that she opened them  “and for a moment felt proud of their prowess: / who knew I could break / / and enter so well?”

The maternal voice in Bell’s piece, “I Was Damning the Traffic,” takes a  typical mom moment–being stuck in the car with the kids–and turns it into an eyebrow-raising account of the reason for the traffic jam in the first place, and this particular mother’s subsequent reaction. A citywide, nude bicycle road rally does not prompt this mom to insist her kids avert their eyes, but rather she tells us how she let them climb up on the car’s roof,

where I followed them, and we all took off
our socks to wave them like tiny flags
patriotic only to all the round ways
of real skin, to all nipples, to cracks
low and high, to furred patches coasting
through the whine of horns
in the hot asphalt air.

For as uninhibited and bold as the mother’s voice appears on the page, the poems which speak from Bell’s childhood and being a daughter–discovering pornography, coming to grips with a father’s homosexuality–have tender self-consciousness, a vulnerability that moved me as a reader.

After finishing From the Belly gratitude replaced my initial guilty pleasure–gratitude, combined with my desire to hear those voices tell their generous tales again. Bell’s collection is not the sort I could put down after a single perusal. And the second time through, instead of seeming to rise from an audience of observers, the collection’s wide range of voices became the concert itself, the various poems intermingling with their vivid stories and rich imagery to form intricate harmony.

The final piece, “Things We Find,” at first shows two lovers walking in a rundown section of town, but soon becomes a song of journey through place and time, with its multisensory description, rhythm and repetition,

…my feet sticky,
your hand warm, sound traveling
between us like filament,
all of this–
a past, a present
–all of this
ours.

This quality, this claiming ownership of the dynamic validity of experience, claiming it out loud and gut-deep the way a singer must project her voice, is emblematic of From the Belly as a whole. Bell’s book communicates one of poetry’s intimate truths–that viewed from a distance, life, like an urban grid, might appear as a series of neat lines, like “a waffle iron / of a city.” But up close humanity is actually a jagged and treasure-strewn path, where we if we look and listen closely, as Bell’s poems invite us to do, our spirits can’t help but hum in response and travel along.

From the Belly by Ramona McCallum

Ramona McCallum is the mother of six kids, artist’s assistant to her husband, ceramic sculptor, B. K. McCallum, and the author of the poetry collection Still Life with Dirty Dishes, forthcoming in January 2013 from Woodley Press. She can be reached at [email protected].