The Best Literary Writing About Mothers and Motherhood
You are at:Home»MER VOX»Poetry»A Part of Ruby’s World by Michael Bennett

When I come upstate
in your third trimester, we
take fetch-crazy Otis for a walk;
the centimeter gained each week
makes you the ball that O runs after.
And I feel Ruby cause a quake along
the equator of your globe-like belly.

Like a misplaced library book as fines pile up,
you are punishingly overdue.
So for the next visit we take it easy, playing
the games that will be set aside until
Ruby becomes old enough not to swallow
toxic Legos, tiny Tinker Toys,
the small body parts from Operation.

The phone call after I return home
says that you still have not popped.
I joke that Ruby refuses to come out
while W is still in office. We discuss
this latent sign that she will be an activist
and other parts that she will play one day.

And then the email:

A part of me wants to sit in the dark and wail.
A braver part is resolved to find
a way in which the gods may be appeased:
learn the magic words, find the golden fruit, slice off a finger.
Or curse and overthrow these cruel gods.
Another part says sshh, sshh, sshh
(We are of so many parts.)

I had picked out a puzzle of the flattened globe
with the continents detachable. I would have said:
Because each mother wants to give her child the world.
But when visiting the nursery-to-be,
I saw that you had bought this very thing.

I think this still will be my gift to her.
Ruby should be welcomed with more than just one world.
Some days we all need two Antarcticas,
a few spare islands here and there,
a territory unexplored.
When she comes home, she’ll see
another world is possible. 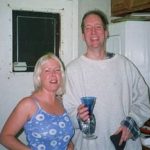 Michael Bennett is a professor of English at Long Island University (Brooklyn) and has published several academic books and articles, as well as poetry or fiction in The Redneck Review of Literature, Downtown Brooklyn, Podium, and Hawk and Handsaw. He is pictured at a New Year’s Eve pajama party with Ruby’s mother, Jackie Brady.