The Best Literary Writing About Mothers and Motherhood
You are at:Home»Reviews»Book Reviews»With These Hands by Donna Katzin 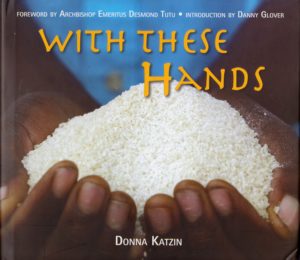 – Donna Katzin has created a haunting and gripping book of poetry that focuses on South Africa, during and after apartheid. Katzin is executive director of Shared Interest, a not-for-profit organization that provides low-income black communities with capital and technical support for creating businesses. With a foreword by Archbishop Emeritus Tutu and an introduction by actor Danny Glover, this book has deservedly received attention by high-profile activists and humanitarians.

It’s difficult not to stumble into hyperbole when describing With These Hands: poignant, heartbreaking, hopeful. But these poems are heartbreaking and hopeful.

The first section of poems, “From These Seeds” focuses on South Africa shackled by apartheid and provides a grim education about the heroes and places where the struggle for equality was fought. These poems of outrage include a lament for the death of Steven Biko, an anti-apartheid leader murdered by police in 1977:

The hard-packed land
holds a man too big
to be confined to a cell
or the back of a truck,
too alive to lie beneath the earth—
–from “Requiem”

Another poem in the first section captures the fiftieth anniversary of a march to protest apartheid:

Fifty years later
she begins again. She has marched these streets before.
She has never set foot on them.
Bent with years of service, silence and resistance
she toyi-toyis like a young girl,
her thin dress dancing in the winter wind.
–from “Imbokodo”

The second section of poems, “With These Hands,” reveals glimpses of the unsung heroes of post-apartheid South Africa—the men and women who are the project partners of Shared Interest.

The more political poems (“Robben Island,” “District 6,” and Soweto”) are compelling and disturbing, but Katzin’s poems are most powerful when she focuses on the individual: a woman growing a crop of mushrooms; the mother of murdered leader Ashley Kriel; a mother building a house for her children:

Here her children will dry their feet in winter
do their sums to bulbs,
not paraffin.
She will sleep deeply
and dream of planting
her garden.
–from “Khayelitsha”

Interspersed with Zulu and Xhosa expressions, the poems sing of the quiet perseverance of today’s citizens of South Africa. Accompanying the poems are vivid photographs, many of them taken by Katzin herself, as well as by celebrated photographer Dr. Peter Magubane. A glossary provides definitions and historical background for the people, places, and events referred to in the poems.

My hope for this book is that it becomes widely purchased: the book for book groups, for it is deserves to be discussed and promoted; the gift for one of spring’s many rites of passage or celebratory occasions. I can’t think of a better gift to share with a loved one in honor of Mother’s Day, Father’s Day or graduation than a book that powerfully acknowledges the troubled past of a country while celebrating its efforts to build a future for all of its citizens.

Nancy Vona is a writer living in Massachusetts with her husband and two sons. The birth of her first son nine years ago renewed her interest and creative writing and she has been writing poetry and essays ever since. She has been published in Rushlight, Tidings, The Mom Egg and Literary Mama.