The Best Literary Writing About Mothers and Motherhood
You are at:Home»Reviews»Book Reviews»Fishwife by Jennifer Jean 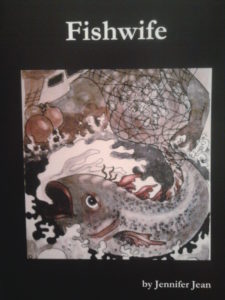 – One chapbook length poem. A song of legend and wit and word/sound play that draws the reader as the tides draw the sea to shore; as mythical Liban and her daughters draw their lovers to themselves. Fishwife tells the tale of the 300-year-young fish woman who, long, long ago, swims to the edge of land in search of a man to love.

From that cover of reeds, she took in
a bright tenor
in a fervor—a man who’d been a bard.
…
…her old words flowed—
an undercurrent
foamed over by his verse.

A daughter of their union is less enamoured with the stuff of love. She, instead, (shape)

shifted about, mated,
then hated that lover, that soul of a gallant man
wrapped up in a chitty slick dolphin;

And so, through the generations of now accursed women – until the narrator is born. Can she lift the maternal curse? Can she learn to be happy and to grow in love as did her very first foremother?