Another morning, another diaper breach.  Strip the baby, strip the sheets, toss the stuffed zebra, giraffe, and elephant into the laundry.  And as an added bonus, get the big green stinky mess in her hair.  Crap all over and all she does is clap her hands and squeal.  “You like to lie in your own poop, don’t you?” I say to her, groggy from a too-short sleep.  Before I know it I’ll have to be out the door, so I begin the mental checklist of the things I can control: get her cleaned up and dressed.  Hold my tongue when she slings her bottle and her cereal onto the floor.  Then get myself a shower, fix my hair, makeup, dress and eat breakfast.  Try not to nag my husband about feeding the cats or taking out the garbage.

The day hasn’t started and already I need an escape plan.

From the morning we brought her home from the hospital eight months ago it’s been like this—we never know what to expect, we can’t get her on a feeding or sleeping schedule, we’ve become the hostages of Our Lady of the Crib.  Granted, I knew this was coming, that having a baby would disrupt the carefree life I had for thirty-one years before she was born. The lets-go-to-the-movies-whenever-we-want life we used to enjoy.  And my sisters had set me straight long before I gave birth.  “I haven’t been to a movie theater in eight years,” April-mother-of-three said.  “Just how much does a ticket cost now?”

“Kiss your life goodbye,” Deidre-mother-of-two told me when I was lamenting the drinking I couldn’t do at the annual work party.

“Loser,” I say about myself as I wipe more poop from Our Lady’s butt.  It’s thick like the organic peanut butter I ate by the jar-full while I was pregnant.  It sticks too—her ear, knuckles, under my nails.

Maybe her milestones—crawling, laughing, hugging, saying “Dada” and “My mama”—should overshadow this stinky negativity, but often they don’t.  Not being able to jot out for a quick dinner, or solitary stroll, has made me feel increasingly like a Buddhist monk.  I live to serve Peace and Goodness but have nothing to show for it except an indifferent god, Our Lady of the Crib.  She doesn’t need my prayers, is satisfied with whatever goes on in her own head, her own diaper.  Displeased or downright dismayed by my pleas to drink the bottle, eat the pureed carrots, to not poop in her crib.

Rummaging through the basket atop her changing table, I finally find a new diaper and begin the process of pinning her down and connecting all of the snaps.  Someone convinced me before I gave birth that cloth diapers would be better for the earth, for me and Our Lady, but so far—because of the nighttime pooping—I hate them.  And I suspect she could care less if I swaddled her in killing-the-earth plastic diapers; a friend bought us a package as a gift and the one time she wore one, there was no difference in her demeanor.

As I toss another wipe—number ten—into the pail, I stumble, stub my toe.  Our Lady gurgles, smiles.  I rub my eyes and realize my mistake too late, my shower will have to come first now that I’m wearing green goo eye shadow.

Why do I do this every morning?  What can I possibly hope to gain from coming to Our Lady?  I used to be a morning person, used to wake and could immediately parse a sentence or enter into a literary debate.  Now my head is filled with fluff, my face smells of poop, and my mind runs on a continuous circuit—wake, change poop, work, home, cook, clean, sleep.  Repeat.  Repeat. Repeat. 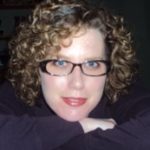 The essays of j.w. young have been anthologized by Random House, Dzanc Books, and Pinchback Press. Her non-fiction has appeared in The Apple Valley Review, Memoir, (and), The Sylvan Echo, Damselfly Press and other national journals.  She is mother to a 3-year-old girl who has decided her mother’s sleep is not a priority.  She teaches writing at Middle Georgia College.