The Best Literary Writing About Mothers and Motherhood
You are at:Home»MER VOX»Prose»Chutes and Tendrils by Blake Wandesforde

My three year-old can wink. She has been able to do it for months now. Popeye gave her the idea, but her timing is all her own. I hear something shatter in the bathroom and round the corner in time to watch the last of my limited edition Channel polish run thick and black like blood across white tiles. She winks at me and I’m rendered speechless. I am the law but she makes me a partner in her crimes and, secretly, I’m grateful for the invitation.

Upon the birth of her son, Laura Nyro, wrote “I don’t want to crush the wilderness in you, child, or the wild that’s in me. How do we keep them both alive?” As a mother, your world shrinky-dinks down to only the safest of bets but when my daughter winks, I remember rolling the dice. I remember the wild that’s in me. In between those foxy gestures, though, I am just a wreck.

When my daughter was born, the threads that keep us all hanging in the balance came into sharp focus. It seemed we owed the very air we breathe to chance. I was low to the ground, more unhappy and lost than I had ever been. I saw the semblance of grace in my baby’s wrinkly brow and derriere –like the Virgin Mother in burnt toast –but the world around seemed Godless. My childhood beliefs ran like wild horses for the hills just when I needed them most. I wanted to give my daughter something sacred from which to spring. I wanted to give her God –if only I could find one.

My daughter can climb. Perched on monkey bars, she swings from the vines. Tarzan gave her the idea, but the abandon is all her own. She could fall and break her arm, chip her tooth, blacken those brown saucers eyes, and still she winks. She climbs, she swings, she winks. She knows more about this place than I do and I watch her faith in the world as the molted skin watches the serpent slither away.

It seems to me now that there are only two ways to see the world, through the eyes of a child and through those of a mother. To the child, suffering is inconceivable and to the mother it is only narrowly averted. Hopefully a mother loves her children into a safe place and hopefully a child teaches her mother to leave one.

At the onset of motherhood, I stopped taking chances which meant –in spite of protests from well-meaning loved ones –that I was shrinky-dinking too. But I’m no Buddhist. My ego thrashed about, tantruming within the confined space of such mad concern. So, last month, my husband and I snatched our little girl from her bed, tucked her into a car seat and drove two hours into a frosty October sunrise so that I could jump out of what my mother would have called “a perfectly good airplane.” Wonder Woman gave me the idea, but the melodrama and bucket-list cheese were all my own.

My husband stood outside with our daughter so she would not hear me read a statement into a camera absolving Long Island Skydiving of any and all liability. “I understand I may be seriously injured or killed.” I could hear my husband outside talking to our little girl, glazed over by donuts and disbelief. “Mommy’s going to fly.” He said his words while I was saying mine and we both knew it.

The pilot crawled from under a rock and climbed up into the plane which tilted when he leaned out the window with a toothless grin and a hearty thumbs up. Did we want to take the kid to the landing area? Yes, we did. This was for her too. My husband wrapped her in a great big scratchy wool blanket and held her tight in the back of an old Ford pick-up.

When the time came, my husband pointed to me, a speck, but maybe finally a trace of myself returning. He encouraged my daughter to look up. That was the point, after all. The shoot might not have opened. The wind might have been against me. The plane could have hit all the geese that no longer fly south. But my daughter needed to see me fly in the face of all of that. She needed to see me wink back because, if nothing else, there is something sacred in that. 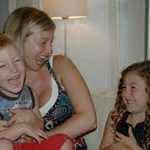 Blake Wandesforde is currently studying at The Brooklyn Conservatory of Music. She writes music and creative nonfiction from her small Brooklyn apartment where she lives with her husband and three children. They are expecting a fourth child this summer. Her essays have been featured at The Brooklyn Public Library and Literary Mama.