The Best Literary Writing About Mothers and Motherhood
You are at:Home»MER VOX»Poetry»The Rules Regarding Glitter by Colleen Michaels

These are the rules regarding glitter. Listen up.

The glitter has been placed in view but out of reach.
This is deliberate.

The “glitter tray,” the cardboard box originally
designated for shaking and shining,
is no longer available to you.
Technically, it is not a tray
if you decide to ride it down the stairs.
More like a sled. No, that doesn’t mean you can
go sledding in the house. No, I don’t think it’s cute
that you left a shiny trail. No, I don’t like slugs.

Yes, Mr. Dyson is a very good British vacuum,
but every appliance has its limits.
No, I don’t think he looks like love on the inside.
He looks like an overworked vacuum, perhaps broken.

These are the times you may use glitter:

The high holidays of kindergarten,
Valentine’s Day is a given, St. Patrick’s,
The 100th day of school – we’ll shimmer.
I’ll even give you the edible glitter sprinkles
for random cupcake-related events
and the occasional festive pancake.

Heck, I might let you sprinkle a bit of the real stuff
on any green vegetable. The fiber would
cancel out any internal alchemy.
Yes, you would have to eat the green vegetable.
I know I only said sprinkle.
You know what I mean.

If I’m wearing braids I’m probably feeling vulnerable, but whimsical.
that’s always a good time to hit me up. I’ll want to be seen
as one of those cool moms, like Susan Sarandon. I’m sure I’ll say yes
to glitter. Maybe we’ll even share outfits from H&M someday, too.

If you are at some other kid’s house and glitter is brought out, feel free to partake. Do not, under any circumstances, ask for glitter. It will make you seem needy
Like you don’t get enough at home. If the mom seems like the cool type,
It’s okay to talk about all the super fun you have doing glitter projects with me.
Talk me up a bit, Honey. Make me sound like Susan Sarandon.

However, if you assess that this is a non-glitter household – like maybe
the mom’s cooking a chicken, neatly, and really only wants the kids to use
those markers who are monogamous with their own special paper –
please do not mention the time we let you paint your whole body blue
and than hosed you down in the front yard. Just play it cool.
Tell her I’m at home cooking a chicken, neatly.

I shouldn’t tell you this, but I’m sure we would let you baste your whole foot
in glue and let you walk through the house with a sparkled sole
if it’s a Saturday morning and Daddy and I are in the bedroom with the door locked and we’ve told you we are working on important taxes. Spell your name in silver
or jazz up some Lego’s. Glitter away.

Basically, use glitter to make me shine.

Now, if it’s a party, we will most likely forget
that you and your buddies are even there.
Eventually, one of the parents will say, “It’s so quiet
up there. What are they up to?” Listen for that – that’s your cue –
start scraping the glitter of the smallest and weakest.

If you take some initiative here, really, not much,
you can ride it out for a few more hours. Say you only made
the mess because you were working collaboratively on a play
about conflict resolution. We will love you more and pat
ourselves on the back. I remind you though, it takes only
one meltdown to shut this party down.

When I say, ‘Just a minute,” as you may have already discovered,
I typically mean one-to-two hours. Now, if you play this right,
my guilt will accumulate, and I will take you to AC Moore
to get more glitter than a Waldorf School. If you’re smart
you’ll steer me towards the pipe cleaner and pom-pom isle.
This is what’s known as a binge.
We will revisit this topic at a later date.

I’m guessing there will come a time when the glitter
gallops off of My Little Pony and travels
to your eyelids and nails.
A door slam between us,
your demands posted in purple sparkle marker.

I will never allow you to bedazzle
your underwear or bra with messages
because that assumes that someone will be reading them.
And while your Father and I appreciate
your nod to literacy, it might break us.
Like Mr. Dyson.

I’m sure there will be a good fight over the prom dress.
And even though mine was black, tight, and additional
sequins were added for emphasis,
I will expect better of you.
You used to coordinate collaborative plays
about conflict resolution when you were six.
I used to pick my nose.
Stop picking your nose and listen to me.
Fine.
Fine.
I am not negotiating.
Am I being crystal clear? 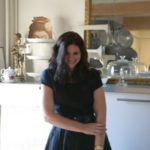 Colleen Michaels directs the Writing Center at Montserrat College of Art. Her poems and essays have appeared in Literary Mama, Bread and Circus, Blue Collar Review and The Mom Egg. In 2008 she was commissioned by the Trustees of the Reservation to create a public art installation of her poem “Align” at Crane Beach in Ipswich, Massachusetts. She was a finalist in the Split This Rock 2010 competition for her poem “Something Fragile.” She is the founder of the Improbable Places Poetry Tour, the Writers Studio for Art Fest Beverly, and a member of the Salem Writers Group. She lives in Beverly with her husband and daughter.