It takes months for me to find a good therapist. When I finally do she tells me my family is too “enmeshed.” As if I didn’t know this already.

Still, I try the label on for size. I use it as a ruler, measuring where I’m at, always in relation to my mother. But all measurements and calculations are more complicated now. I am the oldest of four children and my younger sister Jorelle has been in a car wreck.

The gash in her head is sewn shut by the emergency room doctor but she lays in a coma for a month, not expected to survive. The accident occurred on Valentine’s Day in a storm that covered the roads in black ice. My sister was a month away from turning 30; my infant daughter was about to turn two months old. I’d been married less than four years.

Now there are new warps and welts in the weave of our family’s already complicated enmeshment – new forms no one could want or foresee. I look up the word enmeshment. The definition says: “To entangle, involve, or catch in, or as if in a mesh.”

Sometimes I try to use the therapist’s words as a shield, or a wedge, to pry some space for myself away from my mother, my sister, my family and the situation. Because I have my own family now, this tiny little baby girl, who comes everywhere with me, nursing in my sister’s hospital room, at the nearby diner, at the kitchen table, in the milky bed. And then there is my husband, warm, loving, protective and as stunned as the rest of us by what has happened.

While Jorelle lays silent in the coma, the family gathers near her hospital in Poughkeepsie, NY. At one point, most of us move from a hotel into the vacant house of a friend. My husband has returned to work, and I stay behind, sharing a small, dark bedroom with the baby. My cousin Tara is across the hall in a room filled with seashells. I pace the floor at night and talk on my cell phone. One evening a close friend tells me the best advice he ever got from a family therapist was to remember that the nuclear family is like a triangle – the parents are a base for the kids to grow from. At least, that’s how I remember what he said. My husband and I need to be a base for our daughter – united, with our own shape. We are our own creation. My friend’s words help stop the feeling that night that I was falling through the floor.

Sometimes I felt I was sinking from the weight of my sister’s situation and my responsibility. Who will care for her when my mother can’t? One night there is a form to sign, detailing legal guardianship for my sister. My mother is listed first, then me. Tara has tried to make it plain to me, what this means. It will be me taking care of my sister. I am the oldest of four, and I am the only other daughter.

Eventually Jorelle is transferred to another hospital. Gradually, she emerges from the coma, but she will never be the same person that I knew and loved. She is diagnosed with traumatic brain injury. Legal guardianship stays intact.

Later I will find a lot written about traumatic brain injury (TBI), even whole books and memoirs. But these are usually penned by spouses or parents. Many TBI victims are ultimately cared for by a sibling, but I find little written from this perspective.

I tell Tara what my new therapist has said. Like the other relatives, she has gone back to her own life. She thinks about it for a few days and then calls me back, her Southern childhood present in her voice because as her indignation or excitement grows, her accent asserts itself. “Yes, damn right we’re enmeshed! It’s a good thing. We help each other out.” She talks about how she lived with my sister in Brooklyn. The two of them shared a basement apartment in Carroll Gardens, with Tara’s cats and a big backyard. Tara, a young, well-paid successful corporate attorney. My sister working part-time, making jewelry and working as a choreographer. Tara talks about her brother, who also came to New York and lived for a time with our grandfather in Brooklyn Heights. She reminds me how I lived with her family in Louisiana after high school.

Sometimes this enmeshment is strong, not like a web that you can’t free yourself from but a loving net – the kind that will catch you when you fall spectacularly from the high wire or just need a place to rest.

Years have gone by. My daughter is 5. I meet one day with the mothers’ writers group I have formed. I read them the beginning of a story, about seeing my sister in the coma, wiping spit from her mouth, then wiping spit from the baby’s mouth. They suggest sending it into a literary magazine. I come back feeling supported and happy and creative and … find my mother painting my sister’s room a soft green. She is writing, she tells me, the paint roller moving up and down the walls. She has just submitted her piece to the same magazine. I feel deflated and breathless.

She wants me to write this memoir – or whatever this story of the accident is – with her. Like me, she is a poet. Of course we are both writing about it. We argue about the shape of the project, where to put the poems, where to put the creative nonfiction. But I say I can’t do this. I need to publish my own stuff first, write my own story.

But I come to realize that in many ways I am already doing this. I have had pieces published, gone to my own conferences, employed myself as a freelance journalist, a hired magazine editor. I am a poet and a blogger and a journalist and an editor. I run two writing groups.

Suddenly I see it in a new way. Perhaps instead of trying to go around it I can try to go through it. Now we are working on the story together. Maybe it is a mistake, maybe not. I don’t know where it will lead, but I think it will lead to a healing.

Sometimes I can still hear that therapist. “Enmeshed!” she would say. “You did it again!” Maybe she’s right. But I left her not because I couldn’t handle what she was telling me, but because she never dealt with my repeated attempts to talk about my sister. I didn’t feel I had dealt with the grief.

The writing is what helps most of all. In one poem I wrote about being in stasis and through it understood that I was stuck in grief and not accepting what had happened. I write now. I write and write. And I found another therapist. He uses new words, like setting boundaries and being proactive rather than reactive. And he uses the word “healing.” 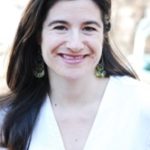 Theta Pavis is a poet and writer whose work has appeared in numerous journals, including the Journal of New Jersey Poets, The Amherst Review, Eclipse, and The Mom Egg. She writes for The New Jersey Moms Blog group, as well as her own parenting blog, North Jersey Beanstalk. An award-winning journalist and editor, she specializes in working with feminist nonprofits. She has taught journalism at UCLA and Kean University and her articles have appeared in many newspapers and magazines. She has a M.S. from the Columbia University School of Journalism and runs a writing group called Ink Stained Mothers. Her 5 year old daughter knows the meaning of the word “deadline.”