Twenty years ago, there was only one reason I coveted turning forty. ONE.  As a hungry student, on the scent of the Shechina (immanent presence of the divine), the esoteric, and the mysterious, I discovered that the rabbis forbid anyone to learn Kabbalah before the age of forty. Suddenly forty became to me like sixteen to a young adolescent yearning to drive a car: The age of unencumbered freedom.  The age that the doors of universal wisdom flew open and the full buffet is there for the taking. Forty became the age of permission.  Of course, there would first be required tests, as the keys to maneuver our own destiny would not just be handed over.  These books I assumed gifted to us powers; the powers of consciousness, insight, self-awareness and possibly ecstasy.

Robert A. Johnson in WE writes, “Three becomes four by the addition of the missing part of our life, and four can become one: the consciousness of our wholeness and individuality as fact.”  Four is the number of completion, integration, balance, the feminine, the number of letters in one of God’s holy names, and freedom on the earthly plane.  (Tarot and Individuation, Dr. Irene Gad)

I would argue that we earn four through the struggle of three.  Through the willingness to hold what Jung called “the tension of opposites,” until the transcendent third breaks through and points us to the fourth.

Knowing the number forty to have biblical significance, I looked up the word “FORTY” in Strong’s Exhaustive Concordance of the Bible: WOW! Were there a lot of entries! Over one hundred and twenty alone before hitting the New Testament!  The last reference to the number forty is in the story of Jonah, the patron saint of all of us perpetually fleeing prodigal daughters and sons.  But before I explore Jonah, part of my shadow of the last twenty years, I will first mention a few other major standouts from the myriad references to forty.

The flood raged forty days and forty nights.  Isaac was forty years old before he married, so was Esau.  Israel ate manna in the desert for forty years before they were ready to be physically self-sufficient. For forty days and nights, God met with Moses on the mountaintop detailing the architectural designs and materials needed to build the traveling tabernacle and, as Moshe descended, God gave him the Ten Commandments. During the same forty days, the Israelites felt lost and confused without their leader and with Aaron’s help built a golden calf, causing Moses when seeing this, in a rage to break God’s handmade sculpture, thus requiring Moses to climb back up the mountain for another forty days and nights to hew new commandments with God.  Joshua was forty years old before he was sent for forty days to scout the land of Israel, and the list goes on and on. Forty marks the time necessary to birth a new reality: it is an alchemical time for transformation.

Returning to the book of Jonah, the last reference to the number forty in the Prophets.  Like Jonah, I, too, found myself at times preferring death to service to an invisible unknowable master or muse.  I, too, tried to stow away on a ship heading to a galaxy outside of Yahweh’s reach to escape my life and work. The first time, in my mid-twenties, a clear voice began to tell me my own story in the form of a novel, I silenced it with depression and anorexia fearing the repercussions.

The poet Alicia Ostriker wrote in “For the Love of God”, the desire to escape our destiny is as old as time and as universal: from Odysseus to Huck Finn to Kerouac.  Eventually, we all find there is no escape from the SELF or the Divine; however, you choose to label the witness who holds us personally accountable for our soul’s growth and work.  But like Jonah, in my own attempts at drowning believing it may save the others in my life, I ultimately found in the depths of my own personal ocean, that the seas of the unconscious did not just hold rivers dark, but also joyous waters of healing.

Turning forty can be heaven or hell depending upon how we choose to live the twenty years leading up to it.  Did we embrace our body, embrace our soul, embrace the gift of who we are?  Seek love or seek control?  It is tempting after a full accounting of forty years of life, like Jonah after his forty days in Nineveh, to be angry at God and boldly say: “take my life for it is better for me to die than live.”  To find ourselves lacking in mercy for others and ourselves, seeking not the building of this world but its destruction, and desiring to remain a rebellious child rather than assuming adulthood.

For six years, since my divorce, I have been blessed and cursed to find myself confined within the belly of the whale, coincidentally my totem animal, struggling to compose a prayer, or poem, or play powerful enough to release me to dry land.  In the process, I have wrested some understanding, some phrases of truth, but still see myself as forever being a beginner at life.

At forty, I do understand better Jonah and am beginning to psychologically part company:  To be more trusting of the muses and masters who speak through the imagination, and more humbly listen to the clear voices with stories to tell. To cease judging, and simply observe without needing to know why.  Perhaps it is not before forty that we are permitted to study Kabbalah, because, whether we sought it or not, the gift of maturity does come naturally when enough life of our own has been lived and we can hold and know our own reality and answers.

So, if like me, the night after turning forty years old, you find yourself after midnight on a Friday night at the dinner table of a sweet, old Kabbalist insisting that according to medieval sources the body is evil, you can know with all the faith of the ancient redwood, that stood from the time before dinosaurs, that his answers are not your answers and his teachings may not be meant for you. 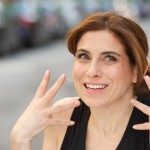 Alana Ruben Free is a playwright, poet, and writer.  She was founding editor of The Mom Egg, and co-edited the publication for six years, and is the producer of the documentary, The Last Stand.  Her play, Beginner at Life, has been produced in Australia and Italy, as well as New York City. http://www.beginneratlife.com.